At the recent ECBL (East Cornwall Bowling League) Finals Day held at
Looe Bowling Club on Sunday 12th September two of our bowlers
tasted success.
In the morning session the Pairs and Triples were held. Dave
Burrough and Badger started slowly in their pairs match to find
themselves 10-0 down but came back well, against the experienced
pairing of John Kelly and Lostwithiel former player and friend of the
club Glyn Coggon now representing Callington B.C., to win.
In the triples David Rowe and his team from Bodmin won after an
extra end against Roger Ellard’s team from Callington in a very tight
game with the lead swinging from one to another.
In the afternoon session we saw the rinks competition with two
teams from Looe battling it out with the eventual winners being Bob
Pacey’s experienced team but not without a fright and possible upset
on the last end. The singles competition featured two players from
Lostwithiel and after some excellent and consistent bowling from
Badger, a former champion and winner of Cornish Times trophy, he
beat Tim Carr. I am sure we will see much more of Tim in finals in
future years.
It was a very good day well hosted by Looe and its members and in
2022 will be played at Lostwithiel with hopefully many Lostwithiel
entrants and finalists.

On Sunday 22nd August the club held its annual mixed triples
bowling competition with all proceeds going towards
Cornwall Hospice Care. Some 60 bowlers from East Cornwall
and some from over the Tamar took part and raised the
fantastic sum of £1,294.63. The event was formally opened
by the Mayor of Lostwithiel Councillor Karen Ross and play
began at 10.00am. Food, provided by club members and
friends, was served throughout the day. At the end of the
competition the final was battled out between two triples
from Lostwithiel Bowling Club with the team of Karen
Worthington, Tim Carr and Chris Soper winning. The cup and
individual trophies were presented by Club Chairman Richard
Read to the winning team. Many thanks to all who took part
and made the day so successful.

As we near the end of a very different season with little evidence of significant
wear on the green it is now time to close the green and consider the Autumn
Programme of work that needs to be carried out.
The challenge set out at the start of the season, when the future of any bowls
being played was questionable, was to maintain a surface that could easily and
quickly be made playable whilst keeping social distancing between green
workers and reducing expenditure in line with expected revenues. As time
went by and restrictions were lifted it was evident that a small proportion of
the membership wanted to play and therefore the green had to be made
suitable although not up to normal match quality. My decision at the time, to
reduce expenditure was to cut to 7.00mm and, if feasible, to only cut once a
week and reduce nitrogen feeds by at least 70%. As the summer progressed if
was evident that we needed to cut twice a week as growth was strong, cover
for holiday and an unfortunate quarantine and for that I thank Adrian and Roy
who took on the task. Thanks also to Dave and Brian who kept an eye on the
machines when necessary. My daily brushers should be remembered as the
job they do is important in minimising disease.
It is sometimes forgotten that our grass surrounds also need looking after as
weeds/disease can easily be transferred onto the green-thanks to Badger with
Adrian’s help and also for developing a new garden at the far side known
affectionally as “Badger’s End”.

An update as to our financial position:

As of today 41 members have paid the asked for subscription to help us through to April 21.
I have agreed a monthly reduction of £ 41 with edf from our direct debit.
Water is paid by meter reading so will be low to non existent
I asked, when paying our rent, to bear in mind we will not be earning any income before the
next rent is due ( watch this space )
Chris is making savings to the green costs both for this summer and into the autumn.
Following an email from Cornwall Bowls I have applied to Sport England for a grant to help
cover our expenses through this summer, mainly green costs, will wait to see if we are
successful.
So in summary I am convinced we will be in a position to carry on as a club following the
enforced lockdown but at the beginning the position was very doubtful, the members by
paying their subs. have guaranteed the future.

Our big challenge is to start with a damaged and worn green at the end of
September and to produce a green suitable for bowling for league and county
play by the beginning of May despite what the autumn and winter weather
and any turf disease has thrown at you. After this year’s rain and winds and
previous years “beast from the east” it is always something different.
This year brings a virus that has brought the whole world to a standstill with
nobody quite sure what the future brings but a future will come and we need
to be ready for it. I fully realise that there are much more important things that
preparing turf for sporting activities but in the context of the future enjoyment
and fitness of thousands of people it has a place in the life of many.
The challenge now then is to produce a surface for some unknown date in the
future whilst being aware of the financial constraints of many clubs and also
being aware of the governments social distancing rules. Much
advice/recommendations have been issued by golfing associations and I have
spoken to a groundsman at a cricket venue and of course I have been scouring
the UK for any information specific to bowling greens including Bowls England,
Bowls Scotland, Bowls Wales, Bowls Central, our fertiliser supplier, Alan Pearce
and others in the county. As with most expert opinion everyone is not in total
agreement for example for height of cut varies from 5.00mm to 12.00mm and
most figures in between.
Based on a full assessment of the advice, the budget available and the
personnel able to work either individually or in very small groups every
greenkeeper will have to make the best decisions for the health of the
members and the club.

Your 2020 fixtures are now available to view under the heading Fixtures.

What would I give for a succession of a few dry days. This has been my worse
year as far as getting on the green to do some work, with wet windy weather
and the green being so low lying, fields around flooded and not too cold to
deter the moss growing. It is imperative that we can start doing some work
over the next three weeks to give us a chance of being ready for the 11th April.
The green always requires aeration not only to assist drainage but to get vital
oxygen into the root zone. We also need to remove the moss to give room for
the fine grasses to grow with the assistance of higher soil temperatures (above
10 C) and a quantity of low nitrogen fertiliser. This year we are using an organic
fertiliser at this time of year.
If the weather plays ball the green team are ready to act.
There is always work to do around the green, cutting the surrounding grass,
trimming the hedges so volunteers are more than welcome.

The annual charity day in aid of the Cornwall Hospice, organised by Jimmy Rule, raised the sum of £ 1241.75p. Twenty Four teams took part and winners of the trophy were Peter Talling, Pat Talling & Clive Edwards.

The presentation of the cheque by Jimmy Rule to the Hospice Representative Jane Appleton took place at the club with several members in attendance. 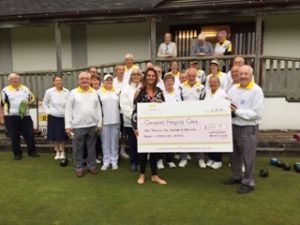 The club had a fairly average season in the East Cornwall Bowling League Triples. Torpoint Bowls Club were the League winners in their first year in the ECBL.

After bumping along for most of the season in the bottom two places in the League, a number of games in quick succession at the end of the season saw us eventually finish in 6th place overall.

However, Lostwithiel have traditionally used the ECBL competition as an opportunity to give games to all players and especially to give new members a taste of a league competition to give them experience for the following season.

With that in mind, we used 30 different players over the course of the season.

Of the 16 games played, we won 6, drew 1 and lost 9, scoring 52.5 points. Congratulations to Ian Burnard who was our most prolific player. Ian played in 14 games and was on the losing triple just once.

The task of the ECBL selector is sometimes a challenging one – there were a couple of occasions where I was seriously worried that we were not going to be able to field a full compliment of players for a match. I’m pleased to report that we came up short only once – and that was due to a mix-up with dates rather than an availability issue.

I must register my thanks for the overwhelming support I have received in my first year as ECBL selector and my gratitude to the hardcore of players who I could nearly always rely on if I was struggling to field a full team.

Here’s to a successful 2020 ECBL season.

Approx. 15 years ago Rosie Smith from the club started the Berta and Bertha competition. The prize for the winner then was a bar of chocolate.

She then not only knitted the two dolls which are played for today but she also slaved away in the kitchen cooking a roast meal. A major fund raiser for the club at this time.

This years event attracted 22 players and even allowing for the sometimes heavy showers the afternoon went off well with everyone having an enjoyable afternoons play followed by a faith tea.

Badger thanked all who attended and presented the the Bertie & Bertha awards to the winners.

Badger thanked all who attended and presented the Bertie & Bertha awards to the winners (plus the booby prize to the loser – himself).